Start a Wiki
'"I now see the path to our glorious return to POWER!" - Zira to young Kovu.

Zira (voiced by the late Suzanne Pleshette, currently by Nika Futterman) is the main antagonist of Jaden's Adventures of The Lion King 2: Simba's Pride. She was exiled by Simba for being Scar's follower. Jaden was there when it happened. She planned to avenge Scar by taking "back" the Pride Lands and killing Simba. But her plans where foiled by Kiara and Kovu. By the end, she encountered another villain named Forte, who despises Jaden as well. The two form a partnership. 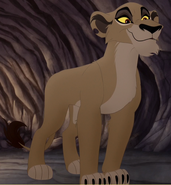 Retrieved from "https://jadensadventures.fandom.com/wiki/Zira?oldid=246494"
Community content is available under CC-BY-SA unless otherwise noted.