Zazu (voiced by Rowan Atkinson) is the red-billed hornbill majordomo of the Pride Lands. He serves for Mufasa, than Scar, and finally Simba. He can act a bit boring at times, but he is still loyal to whom ever is in charge (excluding Scar). He first appeared in Jaden meets The Lion King. Jaden helped Simba and Nala ditch him so that they could see the Elephant Graveyard. But when they were attacked by hyenas, Zazu brought Mufasa with him to stop them. 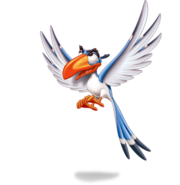 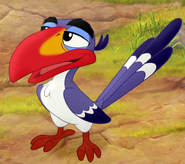