Start a Wiki
Yoda (voiced by Frank Oz) is a very powerful and wise Jedi Master and a character from the Star Wars series. He was one of the most renowned Jedi Masters in galactic history. Standing at about 66 cm tall, he was a male member of a mysterious species.

He was known for his legendary wisdom, mastery of the Force and skills in lightsaber combat. In service to the galaxy and the Force, Grand Master Yoda spent eight centuries training Jedi. He served as a member of the Jedi Council in the last centuries of the Galactic Republic and as Grand Master oversaw the Jedi Order before, during and after the devastating Clone Wars.

Though Yoda was, arguably, the most highly Force-attuned member of the Order, he was not without his flaws. It was partially due to his failure to recognize that Chancellor Sheev Palpatine was actually responsible for the outbreak of the Clone Wars, and was in fact the Sith Lord Darth Sidious, which led to the Republic being overthrown and the Jedi Order being devastated. The Grand Master was among the few Jedi to survive Emperor Palpatine's Jedi Purge, after the beginning of which, he went into exile on the swamp planet of Dagobah.

Later, before dying and becoming one with the Force, the exiled Jedi Master was responsible for the instruction of Luke Skywalker who would use Yoda's training to overthrow the Sith. Following his death, Master Yoda retained his identity within the Force.

Yoda had spent eight centuries training and tutoring generations of Jedi,[2] he was reluctant to accept Anakin Skywalker or Luke Skywalker for Jedi training, considering them unfit. In both cases, however, he allowed Obi-Wan Kenobi to persuade him into accepting them as trainees.

When Dooku triggered a partial room collapse during his duel with Yoda on Geonosis, the Jedi, confronted with the choice of pursuing the fleeing Sith or protecting the hurt Obi-Wan Kenobi and unconscious Anakin Skywalker from the falling debris, opting to save his comrades instead of going after Dooku.[8] However, when fellow Master Plo Koon's fleet was destroyed by the Confederate superweapon Malevolence, Yoda forbade Anakin Skywalker and Ahsoka Tano to conduct a search for Koon, citing the danger posed by the Separatist vessel.

As he neared his death before the Battle of Endor commenced, Yoda accepted his own mortality and imminent demise, and died becoming one with the Force.

Yoda's ears were expressive and would sometimes curl when he was expressing strong emotions like surprise. 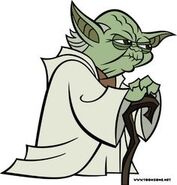 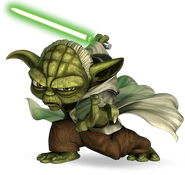 Retrieved from "https://jadensadventures.fandom.com/wiki/Yoda?oldid=245617"
Community content is available under CC-BY-SA unless otherwise noted.