"The Keyblade...a truly marvelous weapon. Were it only in more capable hands." -Xemnas to Sora at Hollow Bastion.

Xemnas (voiced by Paul St. Peter) is the Nobody of Xehanort, the leader of Organization XIII, and the main antagonist of Kingdom Hearts II. Before becoming a Nobody, Xemnas was an apprentice of Ansem the Wise and went by the name Xehanort. Becoming obsessed with Kingdom Hearts and Ansem's research, Xehanort overthrew Ansem, stole his name, and continued Ansem's research. Eventually, Xehanort's research resulted in the creation of the Heartless and Nobodies. Becoming a Nobody himself, Xehanort took the name Xemnas. Xemnas, the oldest and first Nobody, created Organization XIII with other Nobodies. His goal was to create Kingdom Hearts so that he and all the other members could be whole again. But his plan was stopped by Sora, Riku, Donald, and Goofy, and he was defeated.

Little did they know that the REAL reason for Organization XIII's creation was to create 13 vessels of Xehanort. He did this desire from his master, the original Master Xehanort, Keyblade wielder of Darkness and the one who took control of Terra's body. 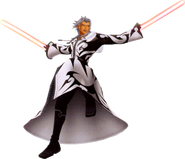 Xemnas's first Dragon From, The Castle of Nothingness 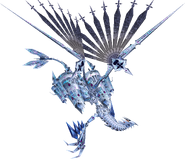 The World of Nothingness

The Fortress of Nothingness

Retrieved from "https://jadensadventures.fandom.com/wiki/Xemnas?oldid=256069"
Community content is available under CC-BY-SA unless otherwise noted.