Wuya (voiced by Susan Silo, later Cree Summer in the sequel) is an evil Heylin witch and the most powerful being in the universe. She is the main antagonist of the first series Xiaolin Showdown, later one of the main antagonists in the sequel Xiaolin Chronicles. She conquered the world 1,500 years ago, but is defeated in the first Xiaolin Showdown by the legendary Grand Master Dashi and trapped in a wooden Puzzle Box. However, many years later she is released by Jack Spicer.

She is usually seen working with a partner (OFTEN Jack Spicer) to collect Shen Gong Wu and take over the world once again. She has the power to sense Shen Gong Wu. However, she is a ghost during most of her life, needing a living person to collect them for her.

In Twilight's Adventures Series, she is the wife of Chase Young, mother of Venom, Carnage and Shadow (Xiaolin Chronicles), and mother-in-law of Adagio Dazzle and the Dazzlings, who helps Adagio and Venom and other villains of Heylin Empire to conquer the world and destroy Twilight and her friends. She is also making a great partnership with Set. 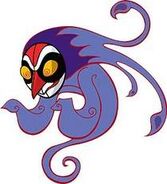 As a Ghost
Community content is available under CC-BY-SA unless otherwise noted.