Wreck-It Ralph (voiced by John C. Reilly) is the villain of the game Fix-It Felix Jr, but is the main protagonist of Disney's Wreck-It Ralph (and Jaden meets Wreck-It Ralph). Ralph was tired of being the bad guy all the time, so he decided to try and earn a medal to prove that he can be a good guy.

He game jumps to Hero's Duty, and takes the medal there, but than accidentally ends up in Sugar Rush, where a little girl named Vanellope Von Schweetz, who is a glitch to the game, takes the medal to try and enter a race. Ralph and Vanellope make a deal that if he helps her build her kart, than she will win him his medal back. King Candy tricks Ralph into thinking that if Vanellope races, she will cause the game to be unplugged. So he destroys the kart to save her and the game. After finding out that she isn't a glitch, he helps her get back in the race, with Felix's help, so that the glitch would be fixed. When Cy-Bugs began to attack Sugar Rush, Ralph was able to stop them all, including King Candy who is revealed from supposed-to-be-dead Turbo, and resumed his role as a video game villain. 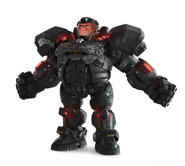 Retrieved from "https://jadensadventures.fandom.com/wiki/Wreck-It_Ralph?oldid=230687"
Community content is available under CC-BY-SA unless otherwise noted.