Bucky Barnes (performed by Sebastian Stan) was Captain America's partner during World War II. After being brainwashed by the Red Skull, he became an agent known as the Winter Soldier but later broke free and became a freelance mercenary.

He is a skilled fighter and a specialist. He is able to hold his own in battle with or without Captain America.

Besides using his honed hand-to-hand combat abilities, Bucky sometimes use weapons to defeat other tougher opponents if necessary.

Being Winter Soldier, he has a wide array of high-tech weapons and gear - including his bionic arm - at his disposal to accomplish even the most dangerous missions with ease. 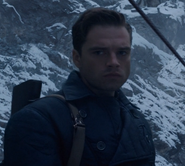 Add a photo to this gallery
Retrieved from "https://jadensadventures.fandom.com/wiki/Winter_Soldier?oldid=255454"
Community content is available under CC-BY-SA unless otherwise noted.