Ventus (voiced by Jesse McCartney) is one of three protagonists from Kingdom Hearts: Birth By Sleep.

He was a Keyblade apprentice who teamed up with his friends Terra and Aqua. They dreamed of becoming Keyblade masters.

Ventus started out as Master Xehanort's apprentice as part of Xehanort's plan to create the χ-blade. But Ventus was a poor candidate when Ventus refused to use his darkness. Fed up with this Master Xehanort used his Keyblade to extract the darkness within the Ven's heart, resulting in the creation of his dark counterpart, Vanitas, and severely damaging Ven's heart. Master Xehanort than left Ventus under the care of Master Eraqus at the Land of Departure where he was greeted by Terra and Aqua with open arms. After Terra asked Ven some questions, Ven fell into a coma since he couldn't remember anything. Aqua watched over him until the day he finally woke up. Ven's heart was damaged again when the χ-blade forged by his and Vanitas' hearts was destroyed. Both times, Sora's heart reaches out to mend his heart. By the end of Kingdom Hearts: Birth By Sleep, Ventus' heart has gone to sleep within Sora so that it can recover until it is fully healed and ready to rejoin his body, which lies comatose but safe within the Chamber of Waking at Castle Oblivion. 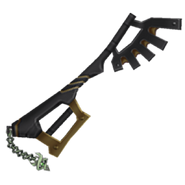 Retrieved from "https://jadensadventures.fandom.com/wiki/Ventus?oldid=255334"
Community content is available under CC-BY-SA unless otherwise noted.