Start a Wiki
Venom (performed by Topher Grace in Spider-Man 3, Ben Diskin in Spectacular Spider-Man and Tom Hardy in Venom) is one of Spider-Man's greatest enemies. Venom is a symbiotic being from space who once was fused with Spider Man, but the creature was rejected by Spider-Man and found a new host, Eddie Brock, the two fused and became one new being, becoming Venom. He is immune to Spider-Man's spider-sense and basically has all of Spider-Man's powers (just doubled). He is also an enemy of Jaden and Jeffrey. When Venom web-slings, they come from the top part of his hands, and not like Spider-Man's. His only weakness is loud noise, its vibration disrupts the bond and eventually separates the host and the Symbiote. However, The Symbiote is also known to reproduce, and created another symbiote, who eventually became Carnage. 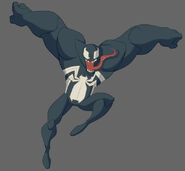 From "The Spectacular Spider-Man" 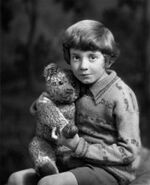