Two-Face alias Harvey Dent (voiced by Richard Moll) is a Batman villain who was a district attorney until an accident occurred where his left side of his body was deformed in an explosion. The trauma was powerful enough to force his alternate personality to dominate, and left Dent in a state where right and wrong no longer held any meaning. Instead, random chance reigned supreme. 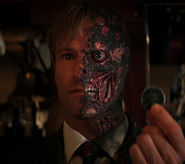 Retrieved from "https://jadensadventures.fandom.com/wiki/Two-Face?oldid=261526"
Community content is available under CC-BY-SA unless otherwise noted.