Princess Twilight Sparkle (voiced by Tara Strong) is the Equestrian counterpart of the human Twilight Sparkle (a.k.a. twin-sister of Sci-Twi) and the main protagonist of My Little Pony: Friendship is Magic/Equestria Girls, and her Adventures Series. She is an Alicorn Princess from Equestria, who first came into the human world when Sunset Shimmer stole her crown from her, and later returns to help her human friends/team, The Rainbooms, defeat the evil trio of sirens, the Dazzlings and their army of Darkness, the Heylin Empire, and met her actual human counterpart as her twin-sister, Sci-Twi. She represents the element of magic in the human world and Equestria.

Twilight first appeared in Twilight and Kyle's Beginning of Equestria Girls as a princess pony from Equestria. She and the Equestrian version of her friends are at the Crystal Empire for her first princess summit since her coronation. Twilight is both nervous and excited about the summit and feeling self-conscious, about wearing the crown, but her friends are supportive as expected, believing her new status as princess should be embraced. In the Crystal Empire bedroom, Twilight is once again feeling unsure of herself after she tries on her crown, wondering what will happen now that she's a princess. Spike assures her everything will be fine, and the two of them go to sleep.

Later that night, Twilight wakes up and saw Sunset Shimmer sneak into her room and steal her crown. As Twilight tackles Sunset in a chamber that houses a large mirror, her crown falls through the mirror. Sunset leaps through the mirror to follow the crown, much to Twilight and her friends' shock. The next morning, Princesses Celestia, Luna and Cadence had instructed Twilight to use the mirror to retrieve her crown back from Sunset Shimmer before the mirror that is a gateway to the human world would close on the third day for for thirty moons. Because without her crown, the other Elements of Harmony are powerless, and Equestria loses one of its greatest defenses. Not only that, but the Elements do not belong on the other side. Sunset would likely use the Element of Magic to harm the inhabitants of the alternate realm, and they will not be able to defend themselves against its power.

Upon entering the human world, Twilight discovers that Principal Celestia will award the crown to the Princess of the Fall Formal dance. So she decides to run for Princess against Sunset Shimmer. With help of Spike (who comes along and transforms into a dog), Kyle Akers (former son of Eris and Pitch Black who happens to be a warlock with his former name Kyscorn), the human counterpart of her friends, Fluttershy, Pinkie Pie, Applejack, Rarity and Rainbow Dash, also her newest friends, Omi, Kimiko Tohomiko, Raimundo Pedrosa, Clay Bailey, Ping-Pong, Dojo, Grim, Wander, Sylvia, Spider-Man (real named Peter Parker), Godzilla, Dudley Puppy, Kitty Katswell, Skunk, Mordecai, Rigby, Danny Phantom, Sam Manson, Tucker Foley, Jenny Wakeman, and even Sunset's "ex-boyfriend", Flash Sentry, she manages to fit in at Canterlot High and have everyone at the school vote for her for Fall Formal Princess instead of Sunset.

However at the Fall Formal, Sunset Shimmer takes the crown after Twilight receives it and transforms into a rage-filled demon. Sunset hypnotizes the students, that she plans to use as an army to invade Equestria. When she attacks Twilight, Twilight's friends shield her and inadvertently activate the magic of friendship that temporarily transforms them into half-pony forms. Also, Sunset should have realized that the Element of Magic would never bring harm to its true wielder in Twilight. They defeat Sunset Shimmer with the magic of friendship, who is remorseful for her actions.

After the dance, Twilight and Spike return to Equestria. Twilight feels more confident about being a princess than before. She bumps into Flash Sentry's Equestrian counterpart and blushes. Twilight's friends tease her for having a crush, but she denies it.

Twilight later appears in Twilight and Kyle's Adventures of Equestrian Girls: Rainbow Rocks as the deuteragonist. Six moons after the Fall Formal, Twilight receives a message from the reformed Sunset Shimmer as she settle in her new castle in Equestria. After reading that three new girls named Adagio Dazzle, Aria Blaze and Sonata Dusk and their army of Heylin Empire arrived at Canterlot High and put everybody except the Rainbooms and Team Owl under their spell through their singing, she senses that her CHS friends need her help. Upon doing her research, Twilight discovers that the three new girls are actually sirens that are exiled from Equestria by a legendary unicorn wizard named Star Swirl the Bearded. Using the book's magic to create a means of activating the portal between the two worlds, she and Spike go through a modified version of the Crystal Mirror to return to the human world.

Once there, Twilight is told of the situation at CHS while also revealing her new status back home in Equestria as the Princess of Friendship and having her own castle. Twilight learns that her human friends are still able to assume half-pony forms after she returned home with the Element of Magic. She attempts to take out the Dazzlings and their Heylin warriors at the party before the Battle of the Bands immediately, only to find the magic of friendship not working. Believing that they need a counter-spell song to counteract the Dazzlings' song, Twilight struggles to come up with one as the Rainbooms and Team Owl battle their way to the finals to buy Twilight more time.

When they are dropped into the basement of the amphitheater stage by Trixie and the Illusions, under encouragement from the Dazzlings, as well at the kingdom of Heylin Empire the villains steal their magic and resurrect Chase Young from the dead, Twilight gives up hope, only to discover that the reason the magic of friendship never worked was because the Rainbooms and Team Owl had allowed a few minor suggestions that they could not agree upon to drive a rift into their friendships. That caused it to become warped into something the Dazzlings along with villains of Heylin Empire could feed upon to regain their powers, and render it powerless.

Once the Rainbooms and Team Owl realize their error and make amends, together with DJ Pon-3, who was immune to the Dazzlings' spell thanks to her headphones, and Sunset lending her her strength to them, Twilight and the band/team are able to overpower and destroy the Dazzlings' power sources, stripping them of their dark Heylin powers permanently, defeating the Heylin army, and leaving the now tone deaf girls to be forced off the stage in disgrace by the angry students and faculty.

Afterward, Twilight returns home to Equestria, but thanks to how she was able to re-energize the portal, she can come back to visit anytime she wants. Sunset also takes it upon herself to write her friendship reports into her old journal for Twilight to read back in Equestria.

Since Twilight can come back to visit to human world anytime she wants, she and Spike went through the Crystal Mirror again, but got accidentally into another dimension and are unconscious, but they eventually wakes up to be in the presence of Princess Celestia. Celestia explains her that in order to make new friends and able to learn her skills as the Princess of Friendship, she must travel to new worlds and put her Princess' responsibility right on her Place so she'll earn to become a future Hero of Light.

In the Adventure Series, Twilight starts having grateful feelings for human version of Rainbow Dash for protecting her from any harm, as they both started their relationship as marefriends. 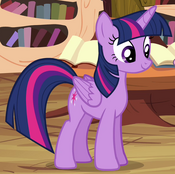 Twilight screaming after becoming a human 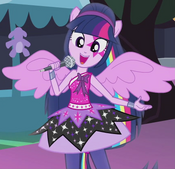 Awwww, doesn't she look so cute while singing?

Still pretty as ever while holding her phone

Twilight with Rainbow Dash in their Rainboom suits

Twilight facing one of her most hated enemies 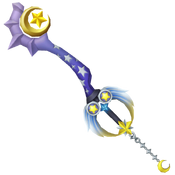 Twilight's dark side whenever darkness spreads in her, Midnight Sparkle

Twilight's mermaid-form's counterpart; seapony (when she's in her pony/alicorn form)

Twilight as a Crystal Guardian

Twilight as Spider-Man (A.K.A. Spider-Mare)

Twilight Sparkle as Batgirl, but simply known as "Batmare".

Twilight as Spider-Mare bonded with the Symbiote.

Twilight in her Avenger uniform in "Avengers: Endgame".