Start a Wiki
Trixie (voiced by Kathleen Barr) is a character from My Little Pony: Friendship is Magic. She's a unicorn and a traveling magician who completely boasts about herself and her magical abilities. She tends to speak in third person and calls herself "The Great and Powerful Trixie". She claims to have defeated an Ursa Major, but when Snipes and Snails brought one into town, Trixie failed to stop it. She was humiliated more when it was an Ursa MINOR. 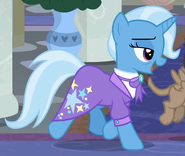 Retrieved from "https://jadensadventures.fandom.com/wiki/Trixie?oldid=255555"
Community content is available under CC-BY-SA unless otherwise noted.