Start a Wiki
Tirek (voiced by Mark Acheson) is an evil centaur and the main antagonist of Twilight's Kingdom. Tirek and his brother Scorpan had a plan a long time ago to rule Equestria together, but soon Scorpan came to befriend the ponies, and tried to get Tirek to abandon their plan. Tirek was imprisoned in Tartarus and Scorpan went back to his home. But many years, Tirek escaped and began stealing magic from ponies. Princess Celestia sent Discord after Tirek, but Tirek offered Discord something better than friendship. Together, Discord and Tirek stole magic from unicorns, pegasi, and earth ponies. Soon, Tirek became so powerful that he even stole Discord's magic, having no use for him anymore. All that was left was the Alicorn magic, which he attempted to take from the Princesses, but they gave their magic to Twilight Sparkle, believing Tirek wouldn't know of a fourth princess. But Tirek did find out, and fought Twilight for the magic, only to reach an impasse. Tirek made a deal with Twilight. The safety of her friends (including Discord) for all the Alicorn magic. Twilight agreed to it. After getting the final key for the box at the Tree of Harmony, the ponies unlocked it and gained the power to stop Tirek and imprison him back in Tartarus.

In the original Generation (voiced by Victor Caroli), Tirek wanted to bring eternal darkness with the rainbow of darkness, and unleash its magic and rule the darkness forever. He met his end from The Rainbow of Light, cleansing the Rainbow of Darkness, and banishing him forever. 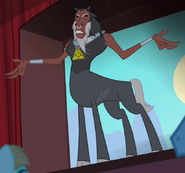 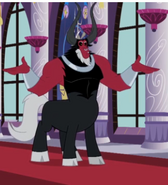 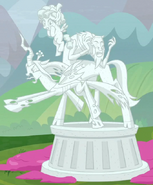 Retrieved from "https://jadensadventures.fandom.com/wiki/Tirek?oldid=252593"
Community content is available under CC-BY-SA unless otherwise noted.