Thumbelina (voiced by Jodi Benson) is the main protagonist of Jaden meets Thumbelina. She got the name from the fact that she's the same size of someone's thumb. Thumbelina had always worried if she was the only one her size, until she met Prince Cornelius and both fell in love with each other. Thumbelina, Jaden, Double D, Mr. Blik, and Waffle were taken by Mama Toad, and Mama Toad wanted Thumbelina to marry her son Grundel Toad. But Thumbelina escaped her with the help of her friends, and went on a journey to find her way home or to the Veil of the Fairies (where Cornelius lived). Alone the way, Thumbelina ran into other characters who had their sight set on her, like Berkeley Beetle, who had her in his show, but it didn't go well, and he called her ugly. When being told that Cornelius was dead, she was heartbrokem, and almost married Mr. Mole. After avoiding Grundel one more time, Thumbelina made it to the Veil of the Fairies, and reunited with Cornelius (who was in fact alive), and she forgave Berkeley for calling her ugly. In the end, Thumbelina married Cornelius, got her own wings, and became princess of the fairies. 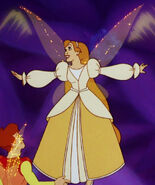