Robert Bruce Banner (performed by Edward Norton in The Incredible Hulk, Mark Ruffalo in The Avengers and onwards and voiced by Fred Tatascoire and Lou Ferrigno) was a normal human scientist until he was exposed to gamma radiation which turned him into a big green monster called the Hulk. He is one of the first five founding heroes of the Avengers and serves as the main powerhouse of the team. 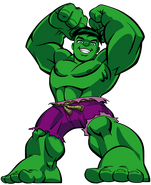 From "The Super Hero Squad Show" As a Squadie

From "Phineas and Ferb: Mission Marvel" 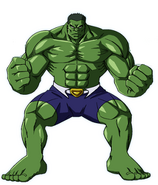 From "Wolverine & the X-Men"

After Dr. Doom saved his life in "Planet Doom"

The Hulk in Avengers: Endgame (Also known as Professor Hulk)
Add a photo to this gallery
Retrieved from "https://jadensadventures.fandom.com/wiki/The_Incredible_Hulk?oldid=252482"
Community content is available under CC-BY-SA unless otherwise noted.