Start a Wiki
"It's a wonderful night for Grinch Night." - The Grinch preparing for Halloween.

The Grinch (performed by Jim Carrey in the live-action version and voiced by Boris Karloff in the animated version, voiced by Benedict Cumbatch in the 2018 animated flim) is a green creature created by Dr. Seuss. He is shown as a green creature like human with green and brown fur along with a pair of brown shoes. He hates "The Whole Christmas Season", so no one really knows why he does, some say his shoes were too tight, others say his head wasn't screwed on just right while others, and adventure teams think that his heart is two sizes too small. He has a dog named, Max, who he tells his problems to. He couldn't stand it anymore so with Max, he made a Santa Claus costume for himself, and tied a reindeer horn on his head, with some black thread. He went to town and stole everything there, only to learn that even with their presents gone, the people in whoville still celebrated Christmas. He eventually realized that the holiday, doesn't come from stores, but, was to be with family, and friends. When the sled with all the stolen presents was about to fall, he tried to stop it, and during the process, his heart grew three sizes right their. He learned the true meaning of Christmas, and saved all the presents on the sled, with the strength of 12 grinches, or ten 10 grinches plus 2. He returned to village bringing everything back, and even carved the towns roast beast. The Grinch has a very favorite holiday where he can be the best at his Grinching, Halloween, where he can unleash all sorts of scares for bullys that hurt peoples feelings, like Cleo's Posse that always like to bully Xion, he calls his holiday, which is usually on Halloween, Grinch Night. 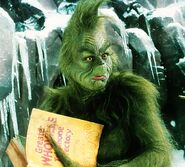 Retrieved from "https://jadensadventures.fandom.com/wiki/The_Grinch?oldid=253088"
Community content is available under CC-BY-SA unless otherwise noted.