Start a Wiki
"I never felt this way about anyone." - The Beast (Adam) discovering his feelings toward Belle.

The Beast (Vocied By Robby Benson) is one of the titular characters of Jaden meets Beauty and The Beast. 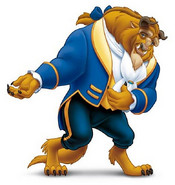 Retrieved from "https://jadensadventures.fandom.com/wiki/The_Beast?oldid=244117"
Community content is available under CC-BY-SA unless otherwise noted.