"I'm not afraid of what the darkness holds now. Even if you do wrestle control of my heart-- even if you cast me into the deepest, darkest abyss-- you'll never sway me from the one cause that pushes me to keep on fighting. Whatever the cost, I'm ready to pay for it." - Terra

Terra (voiced by Jason Dohring) is a character from the Kingdom Hearts series. He was a Keyblade wielder who trained with Aqua and Ven under Master Eraqus. Terra started off as Master Eraqus' apprentice at the Land of Departure where he and Aqua trained to become a Keyblade Master. One day, Master Xehanort arrived and left a new apprentic to work with name Ventus. Terra and Aqua welcomed him with open arms, but Ventus fell into a coma when he was asked questions. After Ventus woke up, Terra and Ven developed a brotherly bond with each other. Several years later, Terra and Aqua were put to the Mark of Mastery Exam, and Terra failed it for not being able to control the darkness within him. Terra was given another opportunity to be given the title of Master. During his mission, he traveled to Destiny Islands and chose Riku to be his successor by performing the Keyblade Inheritance Ceremony on him. After a series of events planned by Master Xehanort, Terra was tricked to use the power of darkness, and took down his own master. And Master Xehanort forced his own heart into Terra's body as his new vessel, resulting in the birth of Terra-Xehanort. After Master Xehanort took Terra's body, he fought his discarded Keyblade Armor which became the Lingering Will, and later on Aqua, only to be defeated twice. During the internal conflict of hearts within him, Terra-Xehanort stabbed himself with his Keyblade to force Terra out, but the results ended up with him falling into the Realm of Darkness, and lost all his memories. He was saved by Aqua, and became the apprentice of Ansem The Wise. However he continued to battle Master Xehanort inside the new Xehanort's body. 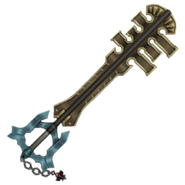 Retrieved from "https://jadensadventures.fandom.com/wiki/Terra?oldid=258921"
Community content is available under CC-BY-SA unless otherwise noted.