Sylvester J. Pussycat and Tweety Bird (both originally voiced by Mel Blanc and currently voiced by Jeff Bergman) are two of the most popular characters from the Looney Tunes and Merrie Melodies cartoons, as well as two key members of the Bugs and Daffy's Adventures team. Although each made 3 appearances before their inevitable 1947 team-up (Tweety-barenaked, might I add-in 3 Bob Clampett cartoons, and Sylvester in 2 Friz Freleng cartoons and one Clampett cartoon), the first time they were paired up set the tone for the rest of their many appearances. Sylvester, perpetually hungry for various reasons (alley cat, no food in the house, cats will be cats), tries to grab Tweety, fails, and is either badly maimed through his own elaborate plots that Tweety usually destroys or is beaten up by a bulldog (sometimes only one, simply named Hector, and sometimes, as in the case of Ain't She Tweet and Dog Pounded, a whole bunch of them) or Tweety's mistress Granny. 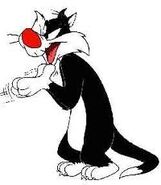 Tweety Bird
Add a photo to this gallery
Retrieved from "https://jadensadventures.fandom.com/wiki/Sylvester_and_Tweety?oldid=190145"
Community content is available under CC-BY-SA unless otherwise noted.