Supreme Leader Snoke (portrayed by Andy Serkis) is the secondary antagonist of the Star Wars sequel trilogy and the mysterious leader of the First Order. Very little is know about Snoke's origins and past, only that he encountered the remnants of the Galactic Empire after its destruction. Snoke took control of those remnants, restructuring them into the First Order, a stronger and more technologically advanced military junta under his control.  Snoke is an ancient master of the Dark Side of the Force.  He tempted a weak Ben Solo into turning against the jedi and becoming Kylo Ren.  Leia and Han both imply that Snoke has been manipulating Ben for years.

Snoke is notoriously reclusive. He lives on the mobile fortress, The Supremecy and possesses no set home planet. Snoke also rarely makes public appears, instead relying on holographic projections.  Only a select few, notably Kylo Ren and General Hux, have seen Snoke in person. Snoke is incredibly fearful of the return of the Jedi.  As such, he is determined to find and eliminate Luke Skywalker.  He is ultimately motivated by fear, greed and bitterness.  At some point in the past, Snoke suffered incredible injuries and as a result possesses a broken and frail body.  Snoke is very physically weak, relying on his force powers and Paetorian Guards for protection. Snoke is a creature of comfort, wearing a fine khalat robe and slippers to support his weak frame. 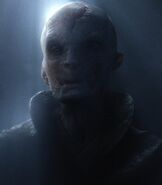 Retrieved from "https://jadensadventures.fandom.com/wiki/Supreme_Leader_Snoke?oldid=256020"
Community content is available under CC-BY-SA unless otherwise noted.