Stitch (Experiment 626) (voiced by Chris Sanders) is one of two protagonists of Jaden meets Lilo and Stitch. He was created by Dr. Jumba to be a destructive creature. Both of them were arrested, but Stitch got away and landed on Earth. Jaden was sent by Mickey Mouse to find Stitch and hopefully see if he's a threat or not. But a girl named Lilo adopted Stitch believing him to be a dog, but some Jaden's friends disbelieved it was a smart thing to do. During his time with Lilo, Stitch was starting to have feelings, and became more than a monster. Jumba and Pleakley were sent to Earth to retrieve Stitch, but after failing several times, the evil Gantu went after Stitch. Stitch was able to stop him with Jumba, Pleakley, and Jaden's help. In the end, Stitch got to stay on Earth, and he, Jumba and Pleakley became part of Lilo's ohana.

While explaining his creation to the Galactic Council early on in Lilo & Stitch, Dr. Jumba gives the following rundown of Stitch's powers: "He is bulletproof, fireproof, shockproof, and can think faster than [a] super computer. He can see in the dark and can move objects 3,000 times his size. His only instinct - to destroy everything he touches!" 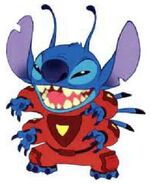 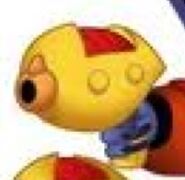 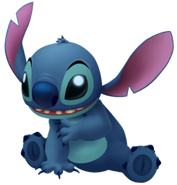 Stitch as he appears in Kingdom Hearts II
Add a photo to this gallery
Retrieved from "https://jadensadventures.fandom.com/wiki/Stitch?oldid=255272"
Community content is available under CC-BY-SA unless otherwise noted.