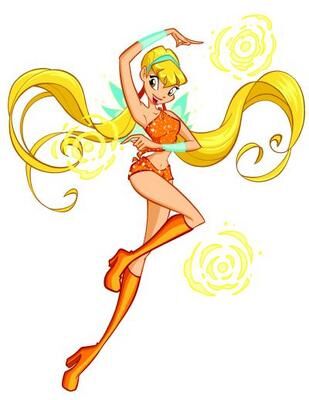 Stella (voiced by Kathleen Delaney) is the fairy of the Shining Sun. Stella used to be a talkative girl, carefree and loved being the center of attention. She had an infamous reputation, but she changed throughout the story. She changed because of her friends. She tends to be spontaneous and dislikes extensive planning but she is able to recognize when her help is needed. Stella cares a lot about her appearance, and is the most stylish and fashionable of the Winx. She loves fashion. Her dream is to be a fashion designer, so she's always creating fashion forward outfits for herself and her friends. She can be high-handed and sometimes the teeniest bit insensitive. But when it comes down to it, Stella is brave and loyal. She is the princess of the planet Solaria. Solaria is the brightest and sunniest planet in all the magical dimension. Since Solaria is Stella's birth-planet, that makes her the only heir to her parents' throne. Her mother, Queen Luna, represents the moon and her father, King Radius, represents the sun. It is revealed in season one that her mother, Queen Luna, and her father, King Radius, are divorced, but she wishes they would get back together, as is shown in season three. Her pixie is Amore, the pixie of love, and her magical pet is Ginger, a pink poodle. Her bonded selkie is Illiris, the keeper of the gate of Solaria. She is Brandon's girlfriend. Stella is one of the strongest fairies as she derives her power from the shining sun. Stella's birthday is August 18. Her hobbies are designing clothes and shopping. Her favorite color is green.

Retrieved from "https://jadensadventures.fandom.com/wiki/Stella?oldid=233651"
Community content is available under CC-BY-SA unless otherwise noted.