Start a Wiki
Shere Khan (originally voiced by George Sanders and Tony Jay, currently voiced by Maurice LaMarche) is a tiger and the main antagonist of the 1967 Disney movie The Jungle Book. Shere Khan is the menace of the jungle, beginning (like most Disney villains) as a sort of elegant evil, and eventually going savage at the end of the movie. Khan has a hatred for humans, and seeks to kill Mowgli solely for that reason. He has competition from Kaa, who at one point tries to hide the man-cub (whom he has hypnotized into his clutches) from him while talking to Shere Khan. Shere Khan and Mowgli eventually have a showdown, with the vultures and Baloo helping out and Baloo getting scratched up in the process. But Mowgli beats the tiger by tying a flaming stick to his tail, and the big pussy cat's afraid of fire, so he runs away. He returns with a vengeance in 2003's The Jungle Book 2, but this time he's killed. He would return to get revenge thanks to his enemy allies, including Bowser Koopa, Set the God of Chaos, and Lucifer the Devil. 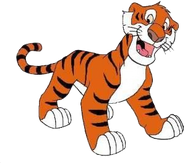 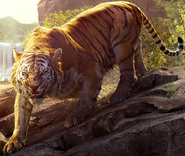 Retrieved from "https://jadensadventures.fandom.com/wiki/Shere_Khan?oldid=237490"
Community content is available under CC-BY-SA unless otherwise noted.