"Soon I will be able to destroy that boy, Jaden, with my new Duel Monsters Deck." - Set preparing for Jaden's demise, "in his head".

Set the God of Chaos (voice actor required) is the main antagonist of Jaden's Adventures series. In Egyptian mythology, Set killed his brother Osiris to become ruler of Egypt. But Osiris' son, Horus, defeated his uncle, and became a great ruler of Egypt. He wishes to destroy Jaden and his friends, because they're a threat to his evil plans. He is the father of Anubis the God of Death, and the husband of Nephthys the Goddess of Lamentation. 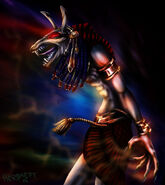 Set as he appears in Tutenstein 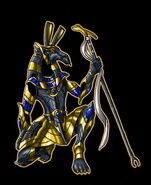 Retrieved from "https://jadensadventures.fandom.com/wiki/Set_the_God_of_Chaos?oldid=253077"
Community content is available under CC-BY-SA unless otherwise noted.