Scar (formerly Taka) (voiced by Jeremy Irons) is the main antagonist of Jaden meets The Lion King, and is Simba and The Jungle Adventure Crew's arch enemy. He wanted to rule the Pride Lands, but he had to kill both his brother, Mufasa, and his nephew, Simba, in order to be next in line for the throne. He also wanted to kill Jaden, because he saw him as a threat to his plans. Scar succeeded in killing Mufasa in a Wildebeest stampede, and told Simba to run away and never return after he sent the hyenas to kill him. Scar took over the Pride Lands, but under his rule, the herds were driven off and a drought occurred. Scar was defeated by Simba, when he finally learned to let go of the past, and challenged him to a fight. In the end, he was eaten alive by the hyenas who he called them as the enemy. He is also the great-uncle of Kiara and Kion. 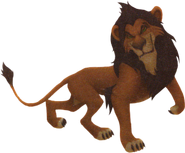 Using the Roar of the Elders 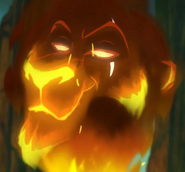