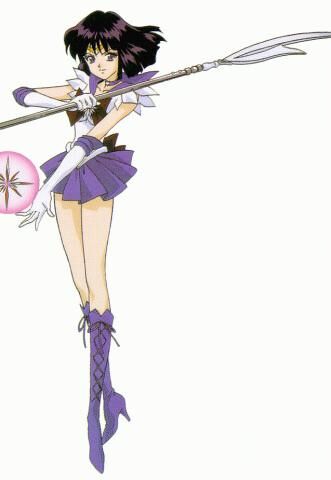 Sailor Saturn was the tenth Sailor Senshi to be introduced in the series, and appeared in the manga, anime, and musicals. Her civilian identity was Hotaru Tomoe.

Sailor Saturn possessed such awesome destructive power that her awakening was feared by Sailor Uranus, Sailor Neptune, and Sailor Pluto, but using these powers to their full extent would bring about her death. Nevertheless, she played a pivotal role in the defeat of the Death Busters, and later became a regular associate of the other Solar System Senshi. She carried a weapon called the Silence Glaive, and referred to herself as the "Soldier of Ruin and Birth" (破滅と誕生の戦士) and the "Soldier of Silence" (沈黙の戦士).

When there was a need for Sailor Saturn's peculiar powers, she was revived and aged rapidly to a stage where she could use them. She was twelve years old in the Sailor Moon S season, reverted to infancy at the end of the season, and then in Sailor Moon Sailor Stars grew up again, but was still obviously younger than she was when she first appeared in the series (although at that point she was still taller than the older Chibiusa). Saturn was the only Senshi who went through this aging process in the series.

Retrieved from "https://jadensadventures.fandom.com/wiki/Sailor_Saturn?oldid=222808"
Community content is available under CC-BY-SA unless otherwise noted.