Start a Wiki
Roxas (voiced by Jesse McCartney) is the Nobody of Sora and a member of Organization XIII, ranked Number XIII. Roxas looks an awful lot like Ventus, since Ventus' heart sleeps inside Sora's. Roxas was born after Sora stabbed himself with Keyblade to People's hearts in order to free Kairi's heart. Xemnas found Roxas at Twilight Town, and made him a member of Organization XIII, 'cause of his ability to use the Keyblade. During his time in Organization XIII, Roxas befriended Axel and Xion. The three of them would hang out on Twilight Town tower and have sea-salt ice cream. But soon, Roxas started to question who he was and the Organization's ways. He left them to find the answers, and was forced to fight his friend Xion. With her Keyblade and his, Roxas attempted to stop the Organization, but ended up in a battle against Riku, where he lost, and was taken to Ansem the Wise, who placed him in a virtual Twilight Town until the time would come until Sora would awaken. Roxas had forgotten about his days in the Organization, his friend Axel, and the Nobodies. While Naminé was restoring Sora's memories, it was affecting Roxas too. Soon, Roxas and Naminé met, where she explained to Roxas that Sora needed him in order to wake up. Eventually, Roxas found Sora and rejoins with his original self. In the World That Never Was, Roxas and Naminé got to see each other again, and promise to be with each other as long as Sora and Kairi are together. Then Naminé and Roxas rejoin with their original selves again. By the end of Kingdom Hearts II, Roxas is the only surviving ex-member of Organization XIII. 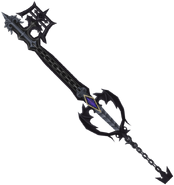 Roxas' 2nd Keyblade (Oblivion)
Add a photo to this gallery

Retrieved from "https://jadensadventures.fandom.com/wiki/Roxas?oldid=256070"
Community content is available under CC-BY-SA unless otherwise noted.