Rose Lavillant (aka Pigella) is a student in Miss Bustier's class at Collège Françoise Dupont.

In "Félix", after being fooled by Félix to think that Adrien didn't appreciate his friends, she is re-akumatized into Princess Fragrance, and, along with Reflekta and Lady Wifi, the three supervillains form The Punishers Trio, a group of supervillains who want to get revenge on Adrien, later Félix.

In "Gang of Secrets", after Marinette keeps hiding secrets from them, Rose is re-akumatized by Shadow Moth into Princess Fragrance along with Lady Wifi, Reflekta, Timebreaker and Horrificator, the five supervillains all form the Gang of Secrets, a group of supervillains who want to reveal Marinette's secrets.

In "Guiltrip", Rose receives the Pig Miraculous from Ladybug. When the Miraculous is inhabited by Daizzi, Rose becomes Pigella, a pig-themed superhero who helps Ladybug and Cat Noir ‘during particularly different missions’ in the fourth season and beyond. 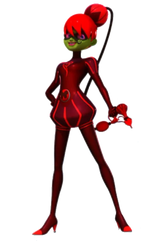 As Pigella
Add a photo to this gallery
Retrieved from "https://jadensadventures.fandom.com/wiki/Rose_Lavillant?oldid=262702"
Community content is available under CC-BY-SA unless otherwise noted.