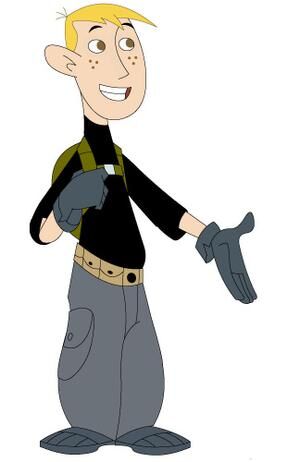 'Ronald "Ron" Stoppable (voiced by Will Friedle) is the deuteragonist of the Disney animated series Kim Possible. His first and last name conjoin to a pun on the word unstoppable.

Ron is a high school student with an eccentric personality who serves as the "bumbling sidekick" and best friend to the show's title character Kim Possible. He was Kim's best friend from Season 1-3 and eventually progressed into a boyfriend relationship during the Season 3 finale.

He provides much of the series' comic relief, but also serves as an anchor to Kim's competitive/image conscious personality. Due to Ron's nature as the comic relief he is the most diverse character in the series, and is the character who has displayed the most contradictions and/or inconsistency in terms of personality and capability throughout.

Retrieved from "https://jadensadventures.fandom.com/wiki/Ron_Stoppable?oldid=257616"
Community content is available under CC-BY-SA unless otherwise noted.