Rev (Voiced by Rob Paulsen) is a head-spinningly quick character, in more ways than one. He is a descendant of Road Runner.

Before gaining his powers, Rev was a delivery boy for a restaurant called Quick Wrap Sandwich Shack and inventor who was always late, even while using rocket skates he created.

Unlike his ancestor, who only made a "meep-meep" noise, Rev can actually talk, though usually at high speed, sometimes annoying or confusing others. In numerous episodes, it is shown that without his powers, Rev, like his brother Rip, speaks at a normal speed...that is, more slowly than the average anthropomorphic roadrunner.

A lesser noted fact is that Rev is actually quite intelligent. He often serves as Tech's technical assistant, and frequently translates Tech's highly scientific vocabulary when the other Loonatics fail to understand him. Rev can usually solve (or at least understand) problems and situations that would otherwise be considered Tech's exclusive field of expertise, although it could be argued that his intelligence is largely due to his brain functioning at a much faster rate than others. In the second season, the bright/inventor aspect of his character was featured, to the point of creating some rivalry between him and Tech.

as a fast food delivery man before becoming a superhero 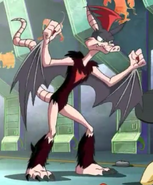 as a Bat/Rodent mutant hybrid
Add a photo to this gallery
Retrieved from "https://jadensadventures.fandom.com/wiki/Rev_Runner?oldid=207724"
Community content is available under CC-BY-SA unless otherwise noted.