Humberto Lopez (voiced by Antony Del Rio) is a young, opinionated boy and he brings extra firepower to the team with his Dino Powers. He's able to summon a vast array of Dino-abilities by shouting out the dinosaur attribute he needs, for example "Velociraptor Legs!" "Pterodactyl Wings!" or "Brachiosaurus Muscle!" Captain America leveraged Reptil into a reluctant Wolverine's care. Now Wolverine is teaching Reptil to handle his powers, and -- just as importantly -- how to be a hero. He feels very competitive with the Falcon, who shrugs it off, but not without some worry. Reptil wears an elemental totem, the Sunstone, on a sturdy choker around his neck. 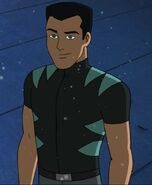 Add a photo to this gallery
Retrieved from "https://jadensadventures.fandom.com/wiki/Reptil?oldid=223129"
Community content is available under CC-BY-SA unless otherwise noted.