The Red Tornado (Voiced by Corey Burton) is a robot and a superhero.

Built by the evil scientist T.O.Morrow, the Red Tornado was orginally supposed to infiltrate the Justice Society of America in order to destroy them for his master. But T.O. Morrow didn't count on two things: First, after completing his construction of the andriod, T.O. Morrow didn't realize that his creation had merged with two seperate entites, Ulthoon the Tornado Tyrant of Rann, and the Tornado Champion, and the second was that the android would gain a conscince and a desire to understand humanity. Turning on his master, the Red Tornado settled down in a small neighborhood, adopting the alias of professor John Ulthoon, using his powers to help the people of his new home.

For t​he Red Tornado's weakness, his wind manipulation powers has to work when he must be surrounded by oxygen. 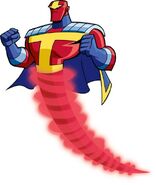 Add a photo to this gallery
Retrieved from "https://jadensadventures.fandom.com/wiki/Red_Tornado?oldid=250389"
Community content is available under CC-BY-SA unless otherwise noted.