Start a Wiki
" Careless' is such an ugly word, I prefer 'carefree."- Ratchet.

"I do bring a certain level of Zing to the table, don't I?"- Clank.

Ratchet is a Lombax (which is a type of bobcat) born on the planet Fastoon in the Polaris galaxy. That is until a Krakmite named Percival Tachyon tricked the Lombax engineers on making weapons, the result, Tachyon use the weapons to attack them. They try to fight back, but are wiped out. Ratchet's father, Kaden, saved his son by launching him to space to the desert planet Veldin in the Solana galaxy. He spend most of his life there until he meet Clank. Ratchet is a gifted mechanic, meaning he can make something out of nothing. He's equiped with a Swingshot and Omni- wrench as a weapon. He can also use a laser pistol tool along with a variaty of asortet weapons. Ratchet is is extremely loyal to the friends that he has made over time.

Clank (birth name: XJ-0461) was made in a robot factory in the Solona galaxy before he escape. He was shot down by security robots and crashed in Veldin where he meet Ratchet. The two became friends and fight Chairmen Drek, and Dr. Nefarious. Clank is the brain and serve as a helper for Ratchet like turn his arms into heli-blades to get to higher planes. Clank is equiped with a vast amount of knowlodge, his strongest traits are his sense of morality and his heart of gold. He knows right from wrong and will go to any lengths to ensure justice is served. 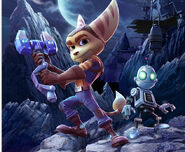 Movie appearence
Add a photo to this gallery
Retrieved from "https://jadensadventures.fandom.com/wiki/Ratchet_%26_Clank?oldid=205160"
Community content is available under CC-BY-SA unless otherwise noted.