Start a Wiki
Princess Rapunzel (voiced by Mandy Moore) is the beautiful princess of Disney's Tangled. When she was a baby, she was kidnapped by Mother Gothel because she had magical hair that had healing powers and could make one young again. If it was cut, it would loose the power & turns brown. So she was kept up in tower, believing that the world was a dangerous place. In Jaden gets Tangled, Jaden and his friends encouraged her to leave the tower to see the "floating lights." In the end, she married Flynn Rider and reunited with her family.

Rapunzel was trapped in the tower with her Mother, Gothel, little lost Melody, her first good-hearted brother, Kronk and the other four evil brother, Clayton, Gaston, Racliffe and Ralphie (Recently Reformed) for a very long time, until the wanted good-hearted criminals, Eugene Fitzhubert AKA Flynn Rider and the first members of The Ohanas (Selena, Bambi, Ariel, Mushu and Genie) helped Rapunzel too see the outside world and relizing she's the lost princess, so thank's too the help of Eugene and her Ohana, she returned too her true home, but didn't stay for long, she still wants too travel this big world and go on many adventures with Flynn and her ohanas, meeting new members/friends, fighting new enemies and exploring new worlds. thus The Ohanas got their true leader. 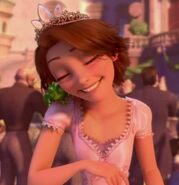 Retrieved from "https://jadensadventures.fandom.com/wiki/Rapunzel?oldid=250194"
Community content is available under CC-BY-SA unless otherwise noted.