"You've been number one for too long, Sullivan! Now your time is up!" -Randall to Sully.

Randall Boggs (voiced by Steve Buscemi) is the main antagonist of Jaden goes to Monsters Inc. He is Sully's rival who desires to be #1. He is a scarer, just like Sully is. Randall, along with Mr. Waternoose, attempted to revolutionize the Monsters Inc. with a "scream extractor", which would take scream from kids by force. But when a kid named Boo went into the Monster world, his plan was discovered, and he was banished into the human world. 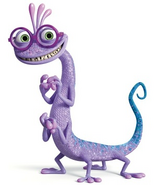 Retrieved from "https://jadensadventures.fandom.com/wiki/Randall_Boggs?oldid=258276"
Community content is available under CC-BY-SA unless otherwise noted.