Holding you, is all the warmth I need - Ralphie said too Elsa as they cuddle in her ice castle

Ralphie Gothel, is the second oldest son (so far) of Mother Gothel, The Mother of Villains, but like Kronk and Rapunzel he has a heart of gold, just made mistakes because of a broken heart, cause by the sacrifice he had to do for his beloved Queen Elsa.

Ralphie has the powers of flames, means he can create fire, flames, lava, magma, and with just one touch he can melt and burn things, this midas-touch was a cursed cause by his uncle, The All Mighty Zeus, even if Ralphie didn't want to Melt or Burn others, he had no choice, fortunaly Elsa gave Ralphie powerful gloves, the same gloves her parents gave too her when she was a child, back when she couldn't control her ice powers, thankfully she leared to control it now she's helping Ralphie with his cursed and teach him how to control it.

Ralphie is still in hiding from King Triton, The gods of mount olympus and the rest of the world, because the world is not ready to welcome him, so as much as it breaks their hearts, the ohanas keeps Ralphie hidden from the world, Ralphie is hidden with best little buddy, Stitch, his mentor pal, Iago, Marahute the gigantic eagle Marahute and his old friends, Jack Sparrow, Baloo, Bagheera, Wilbur, Louis, Chip and Dale

You heard of Ralphie's dark side, Lord Ralphscoe, but do you know how he became this monster? here's the scoop, back when Ralphie and Elsa were only teenagers at the age of 16, Ralphie always visit the lonley princess (before Elsa became the queen) keeping her company and happy, every night, Raphie escaped Gothel's tower too visit Elsa, the two fell deeply inloved, they just knew they will be together forever, than one night, one terrible night, a gang of burgler with lightning powers found out about Elsa's powers and was out too capture her and use her powers, luckily Ralphie showed up too save her on time, but while he was fighting them off, one of Ralphie's fire balls struck Elsa, in the arm, leaving a mark there, after Ralphie scared off the burglers, he saw his love, lying there on the ground, out cold, The Genie and Mushu were there as well backing Ralphie up (This was also back when Ralphie, Genie and Mushu were buddies, before they met Selena) Ralphie was very worried and didn't know what too do, luckily The Genie remembered some trolls that can heal, deep in the woods, so Ralphie climbed on his Golden Eagle, Marahute, and flew as fast as they can too the trolls. the four arrived on time, luckily Papi the leader of the trolls could heal Elsa, but can't removed the mark, Ralphie had too sacrafice for Elsa's own good, he sacrafice her memory of him and the love they share, si nothing like what happend witht e lighting criminals will happend again, Mushu and Genie tried too stopped him but Ralphie blamed himself too much, that he must have this done, Papi did the sacrafice. later that night Ralphie flew the little princess home, kiss her on the cheek and say, "I will never forget you, I love you Elsa", before Elsa could wake up, Ralphie jumped on Marahute and flew off.

Heartbroken and full of anger, Ralphie hide himself from the world, that's when he met someone who was also hidden from the world, little Selena Gomez, she fell in love with Ralphie, but Ralphie couldn't love anyone as much as he loved Elsa, but Ralphie did very much, care for Selena and he needed himself too forget about Elsa, so he thought maybe datng someone else could help, but no, every night, Ralphie dreamed about Elsa and the memory he had with her, sometimes Ralphie wakes up screaming, his mother, Gothel always goes in his room, too confort him, asking what's wrong, but Ralphie never told her, but when Rapunzel came in his room, too take of him, Ralphie always told Rapunzel, because he knows that Rapunzel loves and cares for him then anyone else, they can tell each other anything

after many nights of the memory, Ralphie became more angry and hurt about never being with Elsa, Ralphie's father Hades and his new wife Maleficent knew they can use Ralphie too help the villains rule all, and knew how weak Ralphie is with his anger, so they found their chance too corrupt the poor guy, Ralphie knew he will never loved again, so he decided too joined the dark side, along with Selena Gomez, and thus Lord Ralphscoe was born, luckily after many years, Ralphie reformed because he reunited with his old love and with the ohanas help, they'll get Elsa too fall in love with Ralphie, once again.

back when Ralphie and Elsa we're younger. 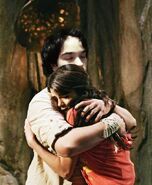 Ralphie and Selena use too date.

Ariel adores his older cousin, now that he reformed. 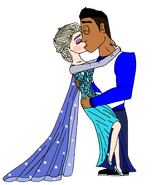 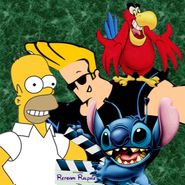 Add a photo to this gallery
Retrieved from "https://jadensadventures.fandom.com/wiki/Ralphie_the_Fire_King?oldid=210678"
Community content is available under CC-BY-SA unless otherwise noted.