Start a Wiki
Rainbow Dash (voiced by Ashleigh Ball) is a student of Canterlot High School and the tritagonist of Equestria Girls and Twilight's Adventures Series. She is known as Canterlot's resident jock, being the captain of every sports teams at Canterlot High called . She is also the leader, songwriter, lead vocalist, and the guitarist of the band as well as member of Twilight's team, The Rainbooms. She represents the Element of Loyalty.

Rainbow Dash is very loyal, fast, brave and bold just like her pony counterpart, and helps her friends to fight the forces of evil from the army of darkness, The Heylin Empire. Her and Twilight's relationship is very grateful and romantic, as she will not allow any villain touch her, mostly Venom. During the series, she is also the foster sister of Kyle Akers, and daughter of Susan Murphy. 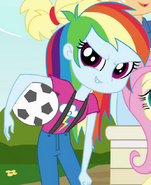 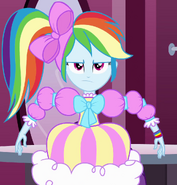 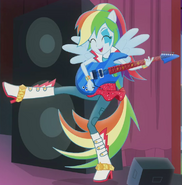 Rainbow Dash as a school spirit

Rainbow Dash and her motocross

Rainbow Dash singing "Awesome As I Wanna Be"

Human Rainbow flying with her Equestrian counterpart in bloopers of "Friendship Games".

Retrieved from "https://jadensadventures.fandom.com/wiki/Rainbow_Dash_(EG)?oldid=240355"
Community content is available under CC-BY-SA unless otherwise noted.