'Princess Zelda (Voiced by Patrica Summerset) is the daughter to the king of Hyrule. She's fearless, and sometimes, she could be a damsel in distress. She's also the one who tells Link about the Tri-Force. Plus, she's also Link's girlfriend. Zelda bears the Tri-Force of Wisdom, which has been pass down in her family for generations. Besides Link, Zelda's allies also include Impa, and Midna. Zelda is also the mortal reincarnation of the Goddess of Hyrule, Hylia.

Zelda from Breath of the Wild(Adventure's outfit)

Zelda from Ocarina of Time(Adult) 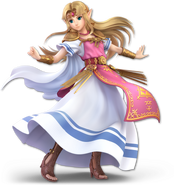 in Super Smash Bros. Ultimate
Add a photo to this gallery
Retrieved from "https://jadensadventures.fandom.com/wiki/Princess_Zelda?oldid=257299"
Community content is available under CC-BY-SA unless otherwise noted.