Start a Wiki
"Oh most wonderful of nights." - Princess Luna

Princess Luna (voiced by Tabitha St. Germain) is a character from My Little Pony: Friendship is Magic. She is the younger sister of Princess Celestia. She was once Nightmare Moon, an evil version of herself that tried to bring Equestria into eternal night but was banished to the moon for a thousand years. But thanks to Twilight Sparkle and her friends, they used the Elements of Harmony on her and she returned to normal and continues ruling Equestria with her sister. During the celebration of Nightmare Night, she wanted to try to make friends and show that she wasn't scary, with mixed results. However, she got help from Twilight Sparkle, on how to help her make friends, after many attempts, she got so mad, that she decided to cancel Nightmare Night permanently. Twilight however, was able to help her finally make friends, after learning from Pinkie Pie, that it's fun to get scared. So when the younger ponies offered up their candy to Luna, she assumed the form of her evil self to scare the group. Luna was having some doubt about the result, until one of youngest ponies asked her, even though there wasn't going to be another Nightmare Night, if she could come again anyway, because it was a lot of fun, and scary at the same time, as their friend. Luna became so overjoyed, that she allowed Nightmare Night back on, and she finally made friends in Ponyville. While Twilight was writting a letter to Princess Celestia about what happened, Rainbow Dash tried to scare her, Luna got her instead. After all, her responsibility is to raise the moon during the night. Luna is very kind, and can be scary on Nightmare Night, just for fun. 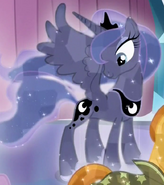 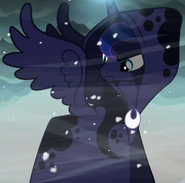 Add a photo to this gallery
Retrieved from "https://jadensadventures.fandom.com/wiki/Princess_Luna?oldid=252853"
Community content is available under CC-BY-SA unless otherwise noted.