Start a Wiki
Princess Cadence (voiced by Britt McKillip) is Shining Armor's fiancee, and Twilight Sparkle's old foal-sitter. In Jeffrey, Jaden, Hiccup & Friends' Storm Adventures of My Little Pony: Friendship is Magic - A Canterlot Wedding, Cadence was kidnapped by Queen Chrysalis, and Queen Chrysalis disguised herself as the princess so that she could feed off of Shining Armor's love. But Twilight, Jaden, Jeffrey, Hiccup, Toothless, Tom, Jerry, Nails, Pikachu and Meowth found the real Princess in the caves beneath Canterlot, and arrived back with her in time to stop the wedding. With her fiance's help, they both stopped Queen Chrysalis, and had their real wedding in the end, becoming Twilight's sister-in-law. Cadence and Shining Armor also become members of Jaden's Adventure Team.

Princess Cadence eventually becomes the ruler of the Crystal Empire with her husband Shining Armor. 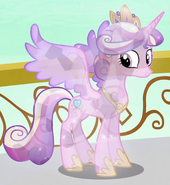 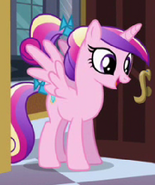 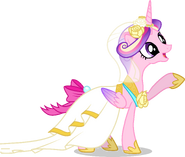 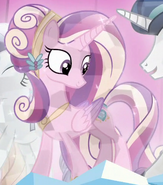 Add a photo to this gallery
Retrieved from "https://jadensadventures.fandom.com/wiki/Princess_Cadence?oldid=251811"
Community content is available under CC-BY-SA unless otherwise noted.