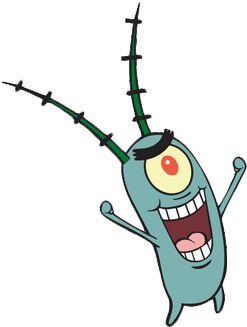 Plankton (voiced by Mr. Lawrence) is the main antagonist of the TV show SpongeBob SquarePants. He has two big goals: obtain the Krabby Patty secret formula so the patties from his own restaurant, the Chum Bucket, will taste good, and take over the world. He is willing to take drastic measures in stealing the formula: on select occasions, he has disguised himself as his own grandmother to make SpongeBob give him the formula, brought in his whole family to hold Mr. Krabs hostage while he got the formula (it was fake, and said plankton are an ingredient in Krabby Patties), traveled into SpongeBob's brain to find the formula in his brain cells, and once even romanced Mrs. Krab's own mother!

He has only succeeded once, in The SpongeBob SquarePants Movie (2004). He angered King Neptune so he would freeze Mr. Krabs, sent SpongeBob off on a quest so he could get the formula and make the Chum Bucket popular, and gave everybody in Bikini Bottom a special helmet that made them his slaves. Eventually, though, SpongeBob came back and defeated him, and he went to jail. 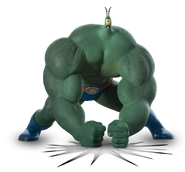