Pharynx (Voiced by Bill Newton) is a male changeling and the older brother of Thorax in My Little Pony: Friendship is Magic. According to Thorax, Pharynx was the head of changeling patrols during Queen Chrysalis' reign, thus leaving him without any duties after Thorax assumed the throne. He fears that Pharynx's inability to accept the hive's new ways and the misery he causes other changelings will threaten Thorax's leadership efforts. Starlight and Trixie try to talk to Pharynx, briefly connecting with them because of their pasts, but he soon dismisses them and calls them losers. Pharynx accepts the hive's new ways and finally transforms into a metamorphosed changeling like the rest of the swarm. 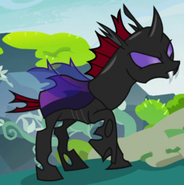 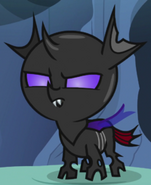 When he was young
Add a photo to this gallery

Retrieved from "https://jadensadventures.fandom.com/wiki/Pharynx?oldid=234397"
Community content is available under CC-BY-SA unless otherwise noted.