Oswald The Lucky Rabbit (Voiced by Frank Welker) is one of the main characters for the video game, Epic Mickey. He was one of Walt Disney's original characters, which was inspired to create Mickey Mouse. He looks after ToonTown while King Mickey's out. Oswald is shown as an inventor, using his controller to help out. He became Mickey's friend after the end of The Phantom Blot. His love interest is Ophelia, a cat. Oswald is smart, funny, creative, & also can help out when ever someone needs advice for an invention. He even helps Mickey to defeat The Phantom Blot with fireworks. After The Phantom Blot was defeated, The Mad Scientist tries to get people to help him, while secretly plans to get revenge, however, after Oswald, & Mickey save him, he returns the favor, & Oswald, along with Mickey, plus the other inhabitants of ToonTown forgive him, which turn him back into a cartoon. 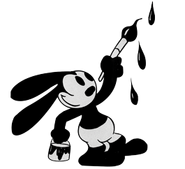 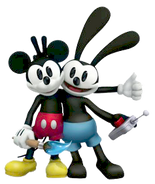