Start a Wiki
Obi-Wan Kenobi (protrayed by Ewan McGregor and Alec Guinness) is a character from the Star Wars franchise. He's a powerful Jedi Master. He was Anakin Skywalker's master, and Qui-Gon Jinn's padawan.

Obi-Wan was extremely powerful and had a very strong connection to the Force. Although he was not quite as powerful as Anakin Skywalker, Obi-Wan was still one of the most powerful Force users in the history of the galaxy. 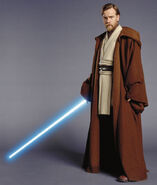 Obi-Wan as he appears in Revenge of the Sith 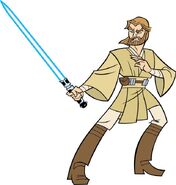 Obi-Wan as a Force Ghost

Anakin and Obi-Wan fighting during the Clone Wars
Add a photo to this gallery
Retrieved from "https://jadensadventures.fandom.com/wiki/Obi-Wan_Kenobi?oldid=245472"
Community content is available under CC-BY-SA unless otherwise noted.