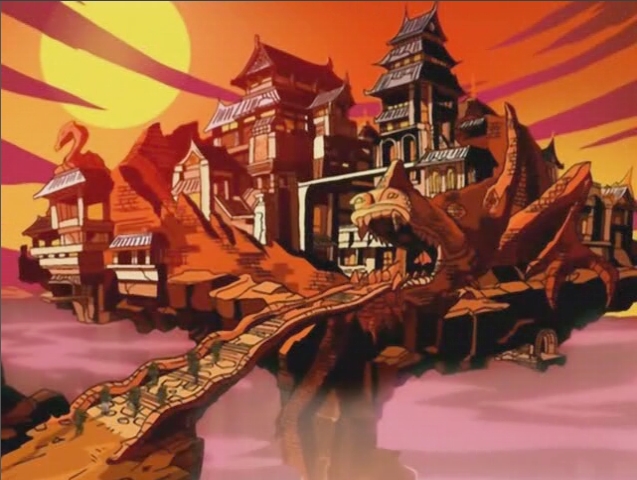 The Ninja Tribunal are a group of four Ninjutsu masters who in Season 5 of the 2003 TV series recruit the Ninja Turtles and four other humans as acolytes to combat an unspecified threat.

During the fifth, "lost" Season of the series, it is revealed that the Tribunal's self-imposed mission is to prevent the resurrection of Oroku Saki, a man/demon who once terrorized Japan as the first Shredder. To that purpose, they have recruited acolytes over the centuries, to whom they teach the hidden secrets of ninjutsu.

During the early fourth century, the people who would become the Ninja Tribunal, as well as a human Oroku Saki, were Japan's five greatest warriors, who rose to fame after they, under the order of the Emperor of Japan, slayed a feared tengu called The Shredder. They became known as "The Five Dragons".

Unbeknownst to all, their victory was not total. Oroku Saki, who had seemingly landed the killing blow to the Tengu, had secretly struck a deal with the demon. In exchange for power, Saki allowed the Tengu's spirit to depart its body and to enter the human's, allowing the Shredder to live on; the demon Saki had slain was but an empty husk.

Now imbued with the Tengu's power, Saki began a reign of terror throughout Japan, aided by a demon army.

The four remaining Dragons, although powerful, realized that they would never defeat their former comrade in their current state. In order to increase their strength, they travelled around the world in order to acquire the knowledge and power to defeat Saki. Successful, they transcended humanity, becoming "forces of nature themselves" as described by the Ancient One.

With their physical and mystical power vastly increased, the four heroes engaged Oroku Saki in battle in order to bring an end to his tyranny. After finally defeating Saki in their dragon avatars, the four warriors knew that the Shredder could not be destroyed - his evil magic was too great. So, they imprisoned Saki in a cask, and hid the three artifacts; his helmet, gauntlet and body. If the three artifacts were to be united, the Shredder would rise again. They have since kept constant vigil over the artifacts, recruiting acolytes (the Ancient One among them) and imparting their secrets to them, secrets that eventually came to be known as Ninjutsu.

The Ancient One's student, Hamato Yoshi, came to the Tribunal to ask for their aide to defeat the Utrom Shredder Ch'rell, but the Tribunal refused, as the alien was not the true Shredder, even dismissing Yoshi's concerns that Ch'rell may challenge the original Saki. This ignorance led to Yoshi's death at the hands of Ch'rell.

After Splinter brought back Yoshi's ashes back to Japan, the Ancient One informed the Tribunal of Yoshi's passing but they were unconcerned. Unknown to everyone, the Ancient One was followed by a bone demon, sent by the Foot Mystics to locate the Shredder's objects. But the young Turtles were able to see through the cloak and damaged the amulet that hid him, allowing him to be defeated. The Tribunal admired the Turtles' prowess but erased their minds and sent them back home. They would later choose them to be Acolytes. The Tribunal began training them to progress from Acolytes to masters, as noted by Master Splinter in New World Order, Part 1 but their training was interrupted by the Heralds of the Shredder and never finished.

With the Foot Mystics' release from Karai's grasp, the Tribunal made their move to train the new Acolytes and secure the Shredder's artifacts. But once all of them were at the Lap of the Gods, the Mystics obtained them, seemingly destroyed the Tribunal.

However, the Tribunal taught their acolytes a lesson that everything they know about the world, themselves and about reality itself would be challenged and secretly allowed their Acolytes to live, watching how events unfold. When the Shredder was defeated, the Tribunal appeared, explaining that by causality, by not helping the Utroms, it created Splinter and the Turtles. Now that their duty is done, they prepared to "move on" and invited the Ancient One to join them.

The Tribunal later returned to attend Casey and April's wedding. Hisomi-Shisho didn't particularly like Gennosuke trying to write his name over his present. The Tribunal helped the Turtles fight off the attack by the Cyber Shredder.

The members of the Ninja Tribunal are among the most powerful beings in the TMNT Universe. Their knowledge of the mystic arts allow them to perform tasks normally beyond the means of the series'other ninjutsu practitioners, such as manipulation of forces like the weather and energy; greatly enhanced speed and strength; and they can project energy to the point where they could summon powerful blasts capable of blowing up multiple cities and mountains. They can also manifest their astral selves into dragon avatars. It appears their knowledge on the mystic arts also gives them the ability to run at super speeds, they can use telekinesis, they can attack on the mental plane, and they even have the strange ability to warp reality.  The Ninja Tribunal resides in the Lap of the Gods, a monastery mystically hidden in Japan. In addition to their powers, they command the Mokusai No Bushi, a group of mystical warriors made out of wood. Each member of the Tribunal is the master of the four distinct aspect of ninjutsu: Spirit, Weapons, Strength, and Stealth.

Retrieved from "https://jadensadventures.fandom.com/wiki/Ninja_Tribunal?oldid=52350"
Community content is available under CC-BY-SA unless otherwise noted.