Nala (voiced by Niketa Calame as a cub, and by Moria Kelly as an adult) is Simba's childhood friend, his wife, and is a good friend to Pooh and Jaden. Jaden knew her as a cub along with Simba. In Jaden meets The Lion King, she went with them to the Elephant Graveyard, only to be attacked by hyenas. But they were saved by Mufasa. By the end of the movie, she falls in love with Simba, they get married (becoming the queen of Pride Rock), and have a daughter named Kiara and a son named Kion. 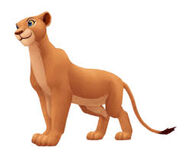 As seen in Kingdom Hearts 2 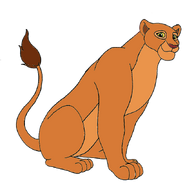 Nala (drawn by BennyTheBeast and recolored by Chris the Lion)