Start a Wiki
Minnie Mouse (Voiced by the late Russi Taylor) is one of the main characters of Mickey Mouse who is currently Mickey's girlfriend. In the Kingdom Hearts saga, she is married to Mickey, and is the Queen of the Disney Castle, and in Jaden's Adventures, the queen of ToonTown. She seems to have anger sometimes, but not all the time. For example, when Jafar and the other Disney villains took over the house of mouse in Mickey's House of Villains. Her arch enemy is Pete.

In Mickey's Great Clubhouse Hunt, she was one of the helpers. She was also the first one for Mickey, Pluto and Professor Von Drake. Minnie Mouse wasn't upset with Pete because she knew it was an accident. On the fourth puzzle piece Mickey needed to find, Minnie helped along. When Mickey was sad, she was also sad too.

She appears to have a blue shirt, a pink bow, pink shoes and is a mouse.

On Mickey Mouse Clubhouse, she appears in most episodes.

She can get a bit loud sometimes. Only because sometimes she's angry. 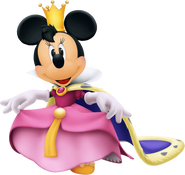 Retrieved from "https://jadensadventures.fandom.com/wiki/Minnie_Mouse?oldid=245031"
Community content is available under CC-BY-SA unless otherwise noted.