"Behold My Powers. I am the strongest Pokemon in the world. Stronger even than Mew!" - Mewtwo

Mewtwo (voiced by Phillip Bartlett) is the main antagonist of Jaden's Adventures of Pokemon the First Movie, but is a misunderstood character. He was created by humans to be a slave, but with his psychic powers, planned to rule the world instead. Jaden was disgusted with what he was thinking, on how humans are a disgrace. Mewtwo stole Ash, and a whole group of other trainers Pokemon to make clones with their DNA. By the end of the movie, Mewtwo experiences a change of heart and stops his destructive rampage; thanks to Ash Ketchum. Wanting to find himself, Mewtwo erased the memories of those present (including Jaden). 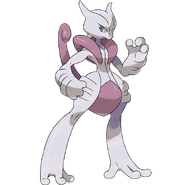 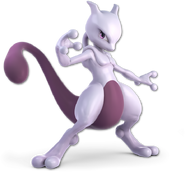 in Super Smash Bros. Ultimate
Add a photo to this gallery

Retrieved from "https://jadensadventures.fandom.com/wiki/Mewtwo?oldid=247402"
Community content is available under CC-BY-SA unless otherwise noted.