Merlin (currently voiced by Jeff Bennett) is the wise and good sorcerer in Jaden's Adventures of The Sword in The Stone. Merlin is the world's most powerful wizard ever known, he used to live in the forest, with his owl, named Archimedes. That was until he Arthur Pendragon, aka Wart, & his friend, Jaden. The group gets to from Merlin a thing or two about problems, & knowledge that's centuries to come, only problem, Arthur doesn't get the idea. So to fix the problem, Merlin changes our heroes to animals, to show the problems they have to deal with every day. Then one Arthur, & his friends meet Mad Madame Mim, causing Merlin to stop her from destroying the others, & he gets challenged to a Wizard's Duel. At the end, Merlin Wins the duel. When winter comes, he gets angry when Arthur becomes a Squire, & Arthur yells at him, so much he goes to Bermuda. However, after Arthur became king after removing the legendary sword, Excalibur, he returned to help out after. Plus, he even said from returning from Bermuda, he even said, "One Big Modern Mess.", he became a his wizard mage, & good friend, along with Jaden, & his team. 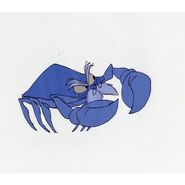 As a Goat
Add a photo to this gallery
Retrieved from "https://jadensadventures.fandom.com/wiki/Merlin?oldid=235968"
Community content is available under CC-BY-SA unless otherwise noted.