Start a Wiki
Merida (Voiced By Kelly Macdonald) Is The Main Character Of Hiccup's Adventures Of Brave, She Is The Archer But Never Wanted To Be Like Her Mother, Elinor, A Queen, She Wanted To Change Her Fate, And She Change Her Mother Into A Bear, And Now She Needs To Figure It Out To Change Her Back, Hiccup And His Team Are Willing To Help Her And Elinor To Undo The Spell Before it's Too Late. 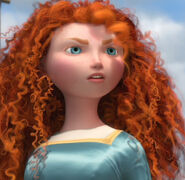 When Merida was Younger
Add a photo to this gallery
Retrieved from "https://jadensadventures.fandom.com/wiki/Merida?oldid=230757"
Community content is available under CC-BY-SA unless otherwise noted.